The day started nice. Slept until 0800, before I went in to pay for the night. I also borrowed the kitchen to boil some water for the breakfast.
I took it easy, talked with Jakob over Skype and fixed some things on the internet while still having wifi.
I also fixed my brakes as they started to be a little bit too loose, but now they are as new!
Then I set off, 20 kilometres, to the petrol station closest to the bridge. On the way I bought some food as my field meals are coming to an end. At the petrol station I made my lunch out of pasta, mozzarella, pepperoni and peanuts. It was delicious! Also, while counting according to the packages, it stopped at around 1200 kcal, and I am still full four hours later.

This was my first meal made on this Trangia, and it was really easy and really good!
Then I tried to get a lift over the bridge. After fifteen minutes I started to get tired of it and looked up the station, which was one kilometre away, so I decided to at least look up the prices. As it was only around 31 SEK for a ticket with bicycle I went with it. The train was late, so all in all I got to stay more than an hour at the station.

After I went off the train in Nyborg, I started biking against Odense. I checked for wifi sometimes and looked at my couch requests, but as I had done them the same day, I got no answers. I also tried to call two different camping places, but as the clock were pretty much (around 1900 or later I think) no one answered. While biking around in Odense, waiting for an answer, I started to ask around for some backyard to just pitch my tent on. I lady told me she could show me to the camping, but on the way, told me I could stay at there place. I though that it meant pitch my tent on their backyard, but I were much more lucky than so! I have showered, been eating (scrambled eggs, a banana, sandwiches with ham and cheese, tomatoes) and also done a lunch pack for tomorrow. Sometimes you really got to be lucky! 😀 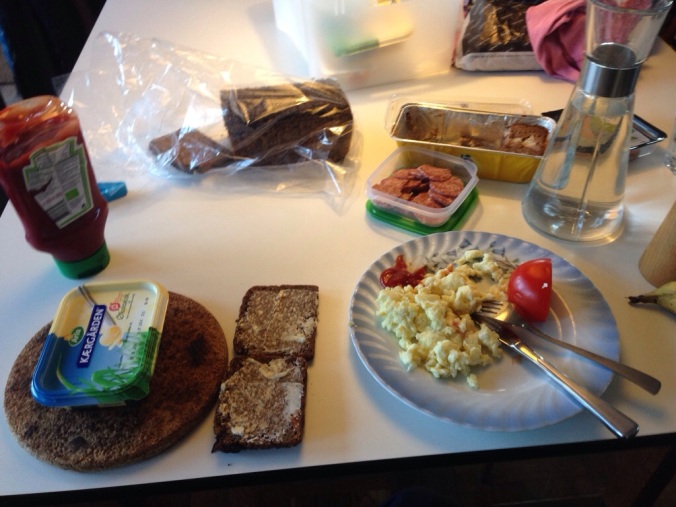 It will be a pretty early day tomorrow, around 0615 I think, but it is worth it! Also it is good to maybe finally get an early start. 😉
Good night world!