I slept around nine hours, and woke up a quarter past nine. It was raining, so I went out to cover my bicycle saddle. Luckily I had left the bicycle beneath a tree the night before so there were no much rain on the leather.
I joined the others for breakfast, but ate my own, to hold down the expenses.
Before lunch I was planning some routes, counting kilometres until Paris (as I will have to fly home to my brothers wedding, and I think I will be in Paris by then) and also planned for the next couch surfing places and such.
Then, I went back to my hut, but heard that they were training on their music. There are four of the guys who are having a band, playing Stomp music (you use things not intended as instruments as instruments). 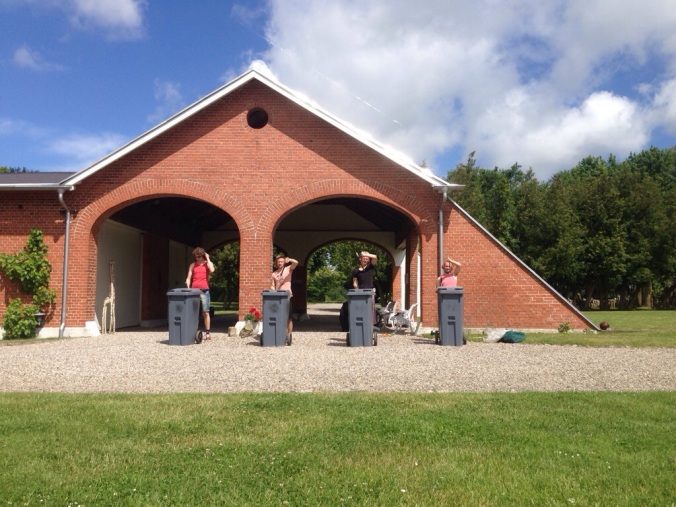 Then, they invited me in to see the number they were going to perform on stage, and it was really awesome! If you want to listen, they have a facebook page (http://www.facebook.com/heartbeatgroup) and also a website (http://www.heartbeatgroup.dk/)! Check them out!
At lunch, I made another portion of the mozzarella-pepperoni-peanuts-pasta mix and again ate with the people at the community. Afterwards I helped with the dishes, and then went to my hut to read the first book in the Hunger Games trilogy. I read until dinner, with a little pause for a blog post, and then ate dinner with them. After the dinner there were ice cream, and I ate home made caramel and liquorice ice cream! It was really nice!
Then I did some more dishes, as it felt like a really easy task to help with.
I then continued to read, even though I joined the others and half looked at the football game. I spent the rest of the evening reading and went to bed at 0200, after I had read the whole book. It was a really nice day!