Today, I ate breakfast with Andrea before she had to go to university. I also bought tickets for the flight home and back, as my brother will have his marriage 4th of july. I will go home in the evening by the 2nd of july and back in the evening of the 5th of july.
I went on pretty late, and I think I started biking around 1030.
At least it went pretty well. Even though I had mainly head wind and side wind, I went on by my standard 20 km/h. I felt pretty well, and ate two energy bars in before stopping for lunch at 1330, and by that time I had gone 50 kilometres. When stopping for lunch I was in Ahaus, and asked if I could borrow wifi by a couple of people. They were really nice and helpful, so the husband created a hotspot from his mobile phone, and I also got to wash my things and refill water after cooking lunch. I also had some nice talks in between my telephone talks.
Around 15-20 kilometres later, I crossed the border, and I am therefore now in the Netherlands! 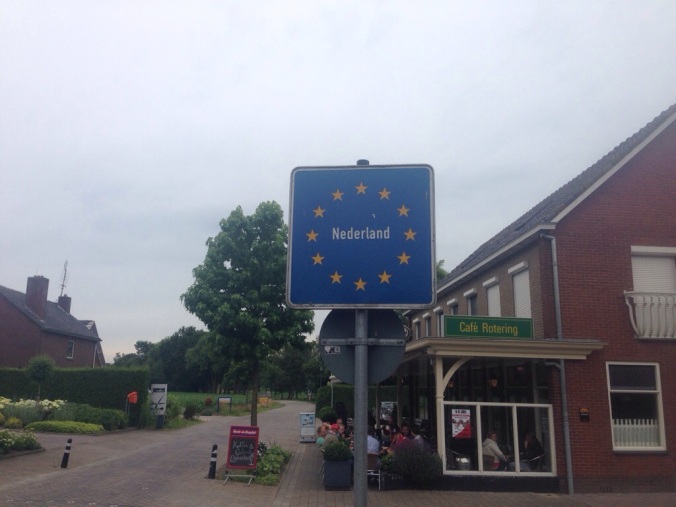 I then went through some smaller cities, and as I have not had so many pictures to post last days here is a nice picture of a bicycle way:

I then arrived at my host’s place, for once pretty early (I was there 1624 but though I would be there at earliest 1700). She and her boyfriend were guarding her parents house during there weekend, so we were there instead of at her place. She was making a wonderful lasagne which was really tasty!
Afterwards me and her boyfriend went to the supermarket so that I could buy food for tomorrow, as many supermarkets here closes on sundays or have really lesser opening times.
Then, we looked at the footballgame and just talked about different things while eating kvarg, Doritos, candy (at least I did 😉 and drinking cola. They were really nice, friendly, easy-going and hospitable, and made me feel like at home really fast. A good, energised day!

3 thoughts on “Next stop: The Netherlands!”