Or Den Bosch, as they apparently call it, was my next goal. It was only 77 kilometres according to the GPS, so I did not feel any pressure at all.
I ate another late breakfast at Normas place, and then hanged around until 1200. I started biking, and this day it was really hot, so I put on suncreen and did not have to use any jacket or trousers. Too bad that resulted in forgetting my rain jacket and rain trousers at Normas place, though. 😉
It was a really hot day. I do not know if this thermometer showed the right temperature, but it must have been right in the sun. 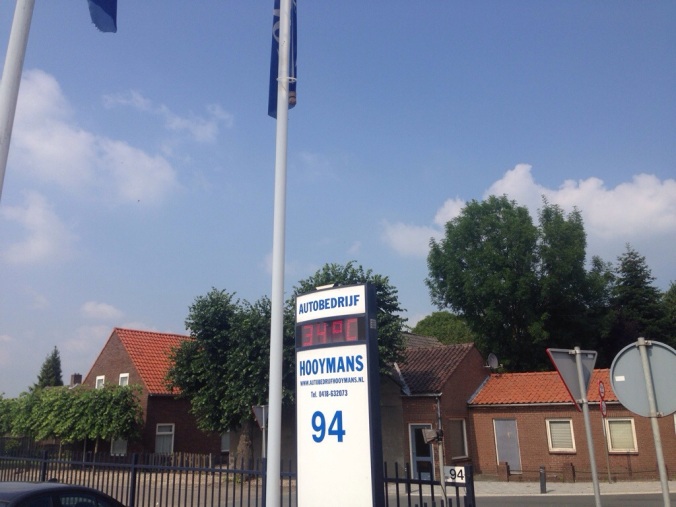 There were a really nice biking way to Den Bosch from Amersfoort so I liked the trip.
When I arrived in Den Bosch, I went into the city centrum and found wifi. Apparently, I wrote the wrong date in my request, so I had nowhere to sleep for tonight!
I sent out some requests and then went to get a snack at the super market. When coming back to the wifi again, I tested warmshowers instead, and found a host with phone number written. I wrote an email and also texted the phone number, and got a really fast answer! I went over to his place, and he and his wife made some dinner for while I took a shower and were very welcoming, even though the short notice. Also, he is working in Utrecht, were Norma is working, so he will pick up my jacket and trousers after work day. Everything went well as always, and now, after some tea, blogging and also some stories and pictures from his trip in Turkey, it is bedtime!