Another pretty easy biking day!
I ate breakfast and then leaved the drop zone, with my aim at Saint Quentin. I had sent out some requests at Couchsurfing and Warmshowers the day before, and hoped someone would answer.
I did not push myself this day either, but I tried to eat as my weight may have gone down a bit. Even if not much, that would be bad, so I started counting calories and protein again.
During the day, I drank some cola, but did not finish the bottle. I tried to think of a place where it could fit without being packed down, and found a perfect way of fitting 0,5 litre bottles! 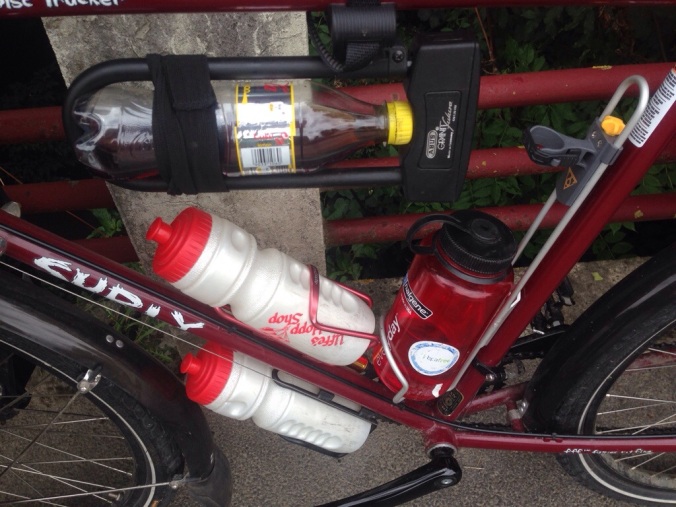 When arriving in Saint Quentin, I went to a McDonalds for wifi. I had no answer yet, and started sending out more requests. I also bought a cheeseburger, which was 2,40 euro. 1,40 more than in Belgium! According to internet, France is the second most expensive country in the world when it comes to McDonalds.
In the end, I had sent out 47 requests. I got 4 answers, which was all declines by people who were out of town. One of them tipped me about a safe place where I could pitch my tent at his old work. As I had no better option right then, I started going there, but after just a hundred metres I saw a camp of caravans. I went into there, and no one spoke english, but through body language I managed to make me understood. It was OK for me to pitch my tent there, and there were also possibilities to get fresh water, so it was a good place. They even treated me some fresh buns they had done!
The kids could a few words in english, and we had conversations with the few words we could speak and also with body language. Apparently it was a gipsy camp, and I got their names and age, and also tried to learn some basic french on the way. They were all really nice, and I had a great evening!