After doing the usual stuff as waking up, packing, eating breakfast and so on, it was time to go again. Not all was there at the moment, but here is a picture of most of the kids! They were really fun!

I then went biking. It was a really hot day, above 30 degrees, so I drank all the time and had a lot of sunscreen! I also passed some really strange roads, that look like a web from above. Some roads had asphalt, some were plain forest roads and some were not even there anymore, and all of them had this sort of signs in the crossings.

When arriving in the small city I had pinpointed on my map, Rully, it was apparently too small to have a hostel, camping or active Couchsurfers/Warmshowers. In the end, I went to Senlis instead, as they at least had McDonalds with Wifi and some hotels. 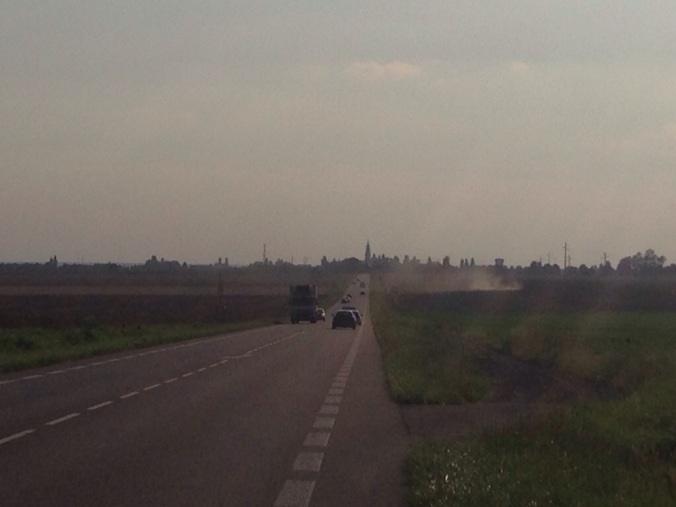 As the hotel I found fast was at least 52 euro, I was thinking of just taking a “shower” at McDonalds, refill the water and then go outside of the city and pitch my tent. I found two Warmshowers in the right direction of Paris though, which both had a telephone number, so I tried messaging them, and one answered really quick! He told me I could pitch my tent on his lawn, and of course there were water and the essential stuff. It was another 12 kilometres, but definitely worth it when I met the family!
45 minutes later I was there and met Nathalie, who was at home. I unpacked my things and got to take the shower as it was still really hot even though it was nine o’clock in the evening. A little bit later Emmanuel came home, and I also got to meet their two children, Mathieu and Benjamin. They all spoke really good english, and I think a part of it is because of their really cool trip. They had been biking for six months total in Australia, New Zealand and USA. I hope my trip will be as nice as theirs seemed to be!
They also treated me dinner, and during the dinner they tipped me about the castle in Chantilly, and a gave me an address to a really good bike ship in Paris that I will have to visit. They were really helpful with everything, and even offered to wash some clothes. It seems the luck in France has come now!