Well, actually they are not that bad, but more about them later!
I actually slept pretty much this morning and did not wake up until ten or so. I took a quick shower and then we went out to buy some breakfast. I think I will miss the bakeries when I leave France!

I then spent some time writing for the blog, writing references and all the other kind of administration stuff. As the market closes pretty early, at least on sundays, I went out to buy some grilled chicken that we would have for lunch later!

As the door on his fridge were not closing itself, we wanted to fix that, and so we did. We just added some height to the front by putting on the feet, and now at least that annoying problem is out of the world!
I also helped out with moving his router to the middle of the apartment (when I was writing in the kitchen earlier there were not enough signal strength to upload pictures to the blog). This took some time as the cables should be hidden and not just lying around, and also his DSL outlet were a little loose, so you could lose connection. That made everything take another hour before we figured it out but now the internet is working!
I also ate dinner at his place, before taking the bus into town. There were a “good bye”-party as end of the Paris 2014 RDV-week at what seemed like a better party place than the over crowded place the day before. It was really nice, and it also had an almost quite area in the cellar, where the music was quiet enough to be able to talk without shouting. I met some new friends this night, a New Zealander-girl and an American guy among others!
When going home, Christophe had tipped me about the city bikes as the metro would probably not go at that time. If you rent a bike, you pay 1,70 euro for 24 hours, and then you only pay more if you would use a bike for more than thirty minutes before leaving it back. There are automatic stations all over the city, so when going longer distances, you just leave it at a station, wait two minutes and then pick it out again. We had a problem with the first station as it was apparently down (payment did not work, and also not getting any bikes out, but the machine did not show that). After finding a working machine, there were no problem though, and I followed Laura, the New Zealander-girl home, before biking back to Christophe’s place. When it was close to thirty minutes I also took a break to buy some pizza along the way. Yummy!

I also went by Arc de Triumph and took a turn in the roundabout as there were almost no cars there. 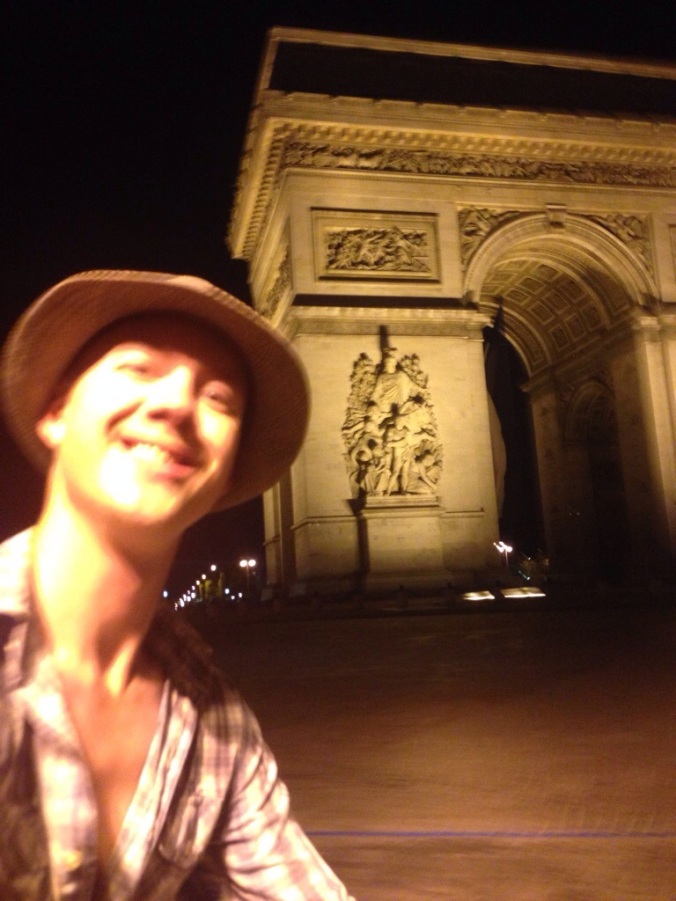 About shitty bikes, well, they were really slow, and many had something more or less broken on them, like the pedals being a little bent, and they were pretty heavy. Of course understandable as they must be sturdy for this sort of thing, and I really do like this, even if I prefer my own bike!