So, today I planned to go 70 kilometres, and I had plenty of time as my host would be back 1845. I started at then, and went along the coast to get some nice views instead of taking the really straight road. It did not take long before I could spot the abbey in the mist (just right of the middle, still hard to see).

When I was really close to Avaranches, my back tire got flat. It was in the middle of a pretty steep serpentine road (if that is also the name in english) so I took a break to repair it. I tried to patch it as it was really easy to find the cause of the flat. 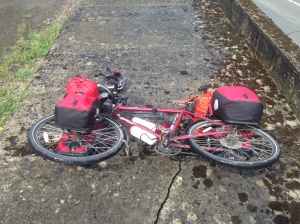 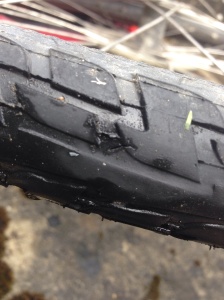 I put some air in the tire, and went up the hill. I was thinking of finding a bike shop as I had another thing in mind, but while looking for a tourist office, I lost air again. When I took of the tire and looked at the patch, I saw that it was leaking. I took away the patch, really cleaned and fixed the area, and put on another patch. I do not know how well it went, because it sounded as it was leaking air from the valve, and as I was fed up of trying to repair, I just changed tube. That went quick and worked really well, and after a visit at the tourist office, I went to the bike shop and bought a new tube and used a bike pump with a gauge.
It was more than close to lunch, so I went to Lidl to see if I could find a bigger bowl. Instead I found two other big shops on the way, and in L’electre (spelling) I found one that may not be perfect, but at least really good (and not that expensive compared to the other ones, around 2 euro). 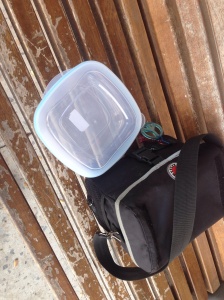 After the lunch, and some extra break, I went to Mont Saint-Michel. I got filmed by some happy tourist guy on the way out there, and then, I was finally at the place.

I had planned this as much as usual, so I knew nothing about the place. I made a walk inside the place and after half an hour I started biking to my host.
I met Nina and Babette, Nina’s mother, and they were both really nice. It was Nina’s, or theirs, first time hosting, but they were really nice. I got a good dinner made of home made french fries and meat, and while talking, Nina offered to show me around for real if I wanted to stay a day extra. I decided to do so as I were not in a hurry and I went along good with them. We went on a late walk and she told me about the border between Normandy and Brittany (the canal in between) and some other stories, and we also talked a lot about random stuff. It was a really good evening, and I looked forward until next day!