After a good breakfast, they gave me both bread and cake for the day. I continued on my trip, and this day was planned for 91 kilometres, a little longer than the last days!
After just a few kilometres, my GPS led me in on a road that looked like a tractor road. After a while, it began to look like this instead:

I am not the type who tries another way just because the road seems bad, and I did have lots of fun, even if a mountain bike would be better. I had to walk a bit with my bike as I did not want to fall in this:

I got with me much to eat, so combined with the snacks and jams I already had it was enough until I arrived at the last place. This is some of the food I ate!

At one point, my GPS thought this was a good way:

And I also rode on this, which felt pretty cool as there were no nearby houses, cars or any other thing, so I felt like I was riding alone! 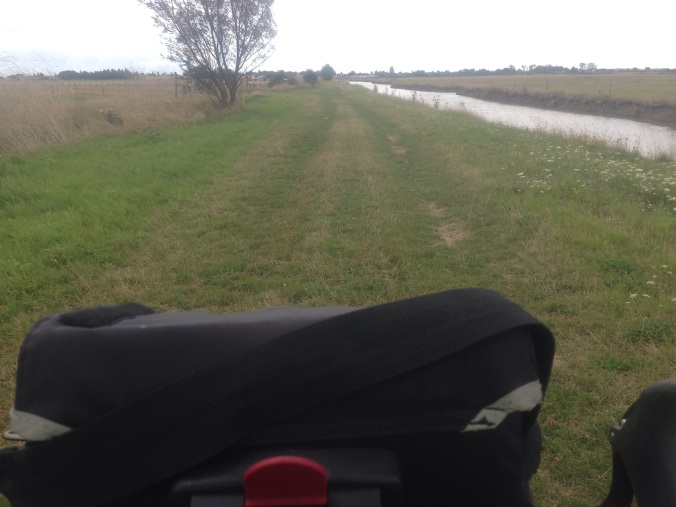 After riding 91 kilometres, I arrived at Gonzalos work. I had some hassle finding the right door, but then I found the art exhibition he was working at.
He did not quit until 1800 and the clock was only 1630, so after some talking I went to buy repair things for my pannier that got a rip in it. I found it in a big sports store Gonzalo tipped me about.
When he had quit work, we went on a small tour around the small city. Went to a bar where we met two friends of him, one who is mute. I actually understood more of what he said than when people spoke french, and it was fun trying to speak with him.
We went to a bar where we met up with his flat mate to look at a football game. When we left, I had eaten two whole pizzas by myself, and I could have eaten a third one.
I also learnt to play on glass this evening, thanks to Eve!