I got a confirmed yes from my host in Toulouse, so now I was not far away from an indoor bed again. As she was coming home at 1730 and it was only 65 kilometres flat, I started pretty late.
I began with another 1500 kcal breakfast while surfing the web, talking with friends, fixing more music on spotify and writing for the blog. At one, I started biking, with another aqueduct bridge as my first goal, a couple of hundred metres away!

Mainly two things happened along the canal today. I went by some sort of machinery used instead of a lock in the canal. This was in Montech, but sadly, they are not using it anymore.

The other happening was that I passed a kayak guy, and I recognised him, as I passed him the day before. I stop for a quick chat, and he was going from west to east along the canal. Cool guy!

I came to Toulouse a bit early, even though I started late, due to maintaining high speeds. I went to Lidl and bought some chocolate, Pringles and snickers. I was just going to buy Snickers but did not have cash and you have to buy for at least 5 euros to use the card.
Outside, a beggar asked for something, so I have here two snickers (I had bought a six pack). Then, I went to my hosts place, who came there just a few minutes after me arriving.
I took a shower and put on some ordinary clothes, started a washing machine and then we went shopping. I learnt from yesterday, and bought two pizzas this time. I love how much I can eat while biking!
We helped Mikkal, one of Raphaëlle’s flatmates, to get his car going. We tried to push it, but I thought it would be easier to use jumper cables, and after stopping some cars a nice guy helped us. 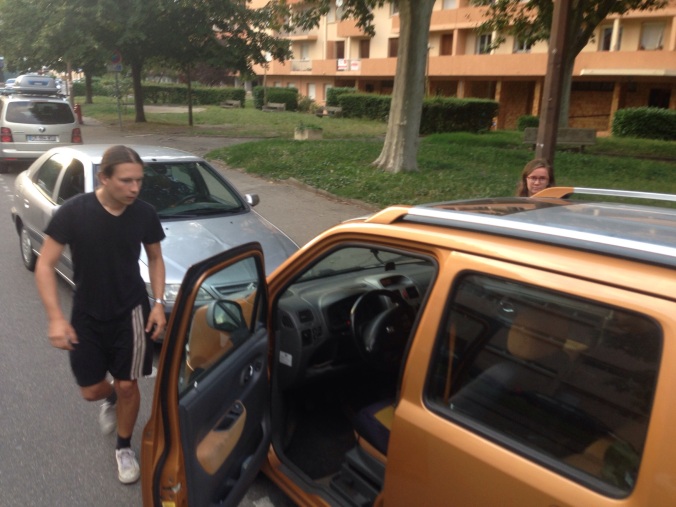 I had asked to stay for an extra day, so tomorrow would be a resting day!
After eating dinner and chatting for a while, I went to bed, watched a movie and then slept.