I started the day with some pancakes. (I have now counted, and that is 2000kilocalories of glorious pancakes. Nice.) 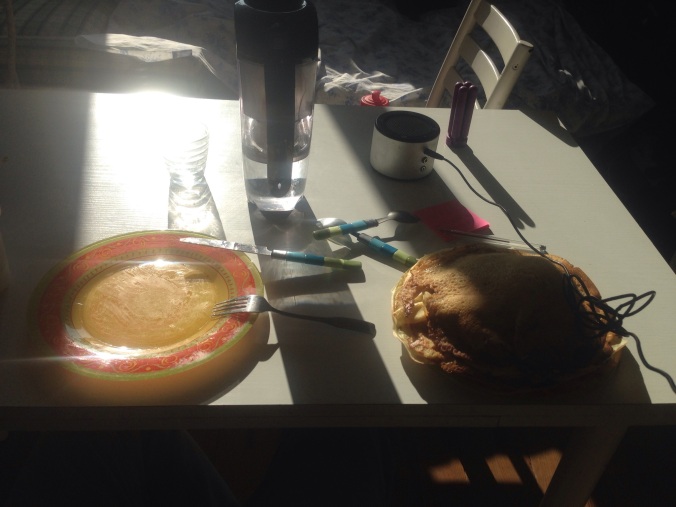 I proceeded by watching a movie, The Amazing Spider-Man 2.
I discovered I had fungus between my toes, so after the movie I went out to the city as I had planned to get a new USB-charger, but now also a cream for the toes.
I left my phone at home as I wanted to test go without GPS. I used my watch as compass, and found the store Fnac without needing help. I could not find a charger I wanted though, so outside, I went to the pharmacy and fixed a cream for the toes. I then asked some random dude for help (actually, I tried to ask many people if they spoke English (I asked in french) but most were rude and just walked by), and he told me about Darty a kilometre away, so I went there. I found a charger with dual USB ports, so now I can charge all three things at once (battery, phone and speaker). Earlier at least I had two wall plugs, but one died after the yoghurt accident the day I left Paris.
I then went by a supermarket and bought some yoghurt and bread for an easy lunch and went home. I ate and watched Captain America: Winter soldier. Then, most people were home, and me, Gabriel and Raphaëlle ate together (some random sausage/tomato/rice/omelette thing, at least it was good!). We then played a game, Jungle Speed I think the name was. They had to do some phone talking after that, so I watched another movie, Need for Speed, and then it was time to sleep!

Raphaëlle and Mikkal, Gabriel was sadly not on this glorious picture.