I started with waking up on this place. Awesome view!

After that, I ate a really good breakfast, with some ingredients from the garden, and home made yoghurt!

I started pretty late as I did some writing, but at twelve I was biking again. It started with three kilometres downhill, with speeds above 50. I felt that it went pretty slow in the small slopes though, so I borrowed an air pump down in a village, and I had list much air in the rear wheel. Soon I get to change the tire, and I guess I’ll change the tube also.
I made another small stop to configure my brakes, and met some old people telling me about a beautiful bridge. I went down there, and it was beautiful, and also my lowest point for the day (426 metres). 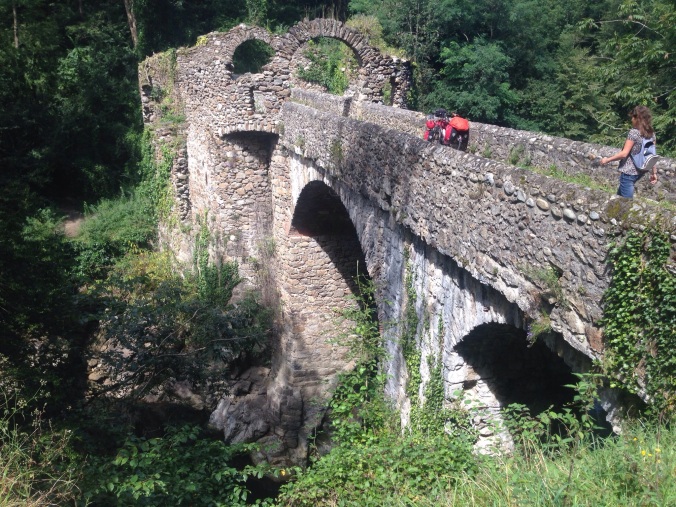 I then started climbing, climbing, climbing with a few small slopes down.
I took my lunch at 666 metres height, and continued to get to a village my hosts told me about, where you can walk to some hot springs. I found the village and at 1087 metres I left my bike to walk on the trail. I packed my most important things in the back pack, and took out the heavy things, the food for example. I walked the trail up to 1264 metres where I found the hot springs. They were really nice and relaxing, and I stayed in them for about an hour!

I went back down to the bike, and on my way down I saw this small contraption that were spinning in the stream!

I got down to the bike, and went down to the village to find a camping. Lucky enough it seemed to be a camping municipal in this village (I had passed some four-star campings on the way, and that is expensive. This one was 7 euro). I checked in, pitched my tent and made a big pasta-mozzarella-peanuts-oil-dinner and also ate some bread with cheese to start preparing for tomorrow.

I slept at approximately 1088 metres height. That is 662 metres more than my lowest point, but I have probably taken at least 800 metres during the day. Tomorrow will be harder!