After 12 hours of sleep I went up and had breakfast with Angeles. She made a really nice one with a chorizo omelette and bread with Nutella!
I also had a second breakfast consisting of cereal and milk, and more bread. You can never get too much breakfast.
I took it easy the whole day, as my next plan was Ciudad Real, which was 120 kilometres away. Therefor, I started as late as 1730, after watching movies and planning a bit for Morocco.
The sun went down faster than I expected, though (I thought it would be closer to eight, but it was more like 1920).

I put on my lights and continued.
Soon it was dark, but I had not yet found a good place to camp on. After a while I saw a restaurant, more or less in the middle of nowhere, so I stopped there and asked. There seemed to be a family owned restaurant, and the man in charge said it was no problem! 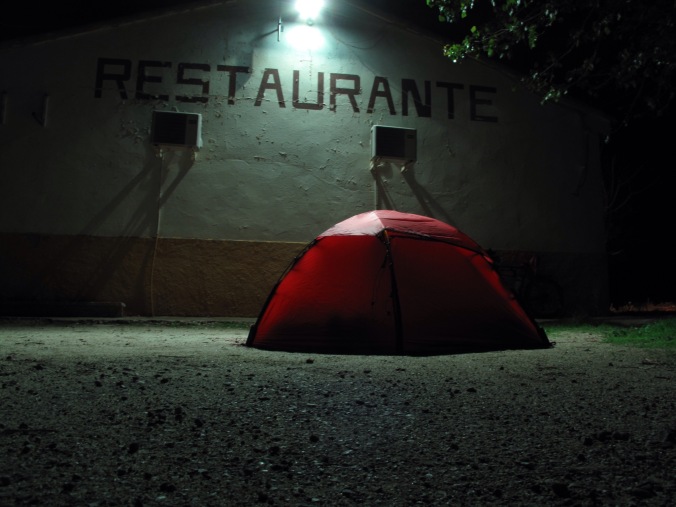 I got to use the bathroom, and as a kind of thanks, and also because I was hungry, I bought a really tasty sandwich and a small glass of whiskey.

I also got some internet shared to me from one of the guys mobile phones.
Afterwards, I went out to eat my “real” dinner and watch more series before going to sleep!