I woke up, made breakfast and packed my stuff. So far, so good. 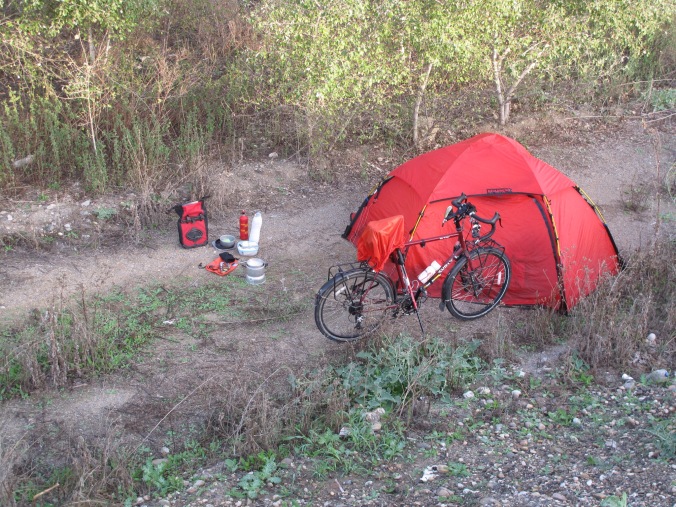 The problems were not before I saw that I apparently had a flat. I search for the hole, and any scrap in the tire, for a total of 30 minutes, without finding anything. Some road bikers stop, one who gave me some repair patches and “rubber cement”, and one who could help me plan the rest of my day.
When putting the wheel back, I managed to get the brake pads to hop loose, so I also got to learn how to insert those.
I got enough air in the tube to get to the petrol station a couple of kilometres away, where I put in more air and also bought two baguettes for an euro. After a high climb through the city, I could start biking, and at twelve I had managed 5 kilometres in total, far behind the schedule.
It started slow, with head wind and roads in pretty bad shape. I felt that this day sucked and wondered if I would even manage 80 kilometres. Then, at an intersection, I was turning right, and suddenly I had tailwind and good roads. Now I rolled really fast!
Suddenly, I got 150 meter height to take, and it was around 30 degrees. I pushed through it, and finally on the top, went into a petrol station to refill water, use the toilet and buy some ice cream. As it was time for lunch, I found a place in the shadow, and ate one of the baguettes. 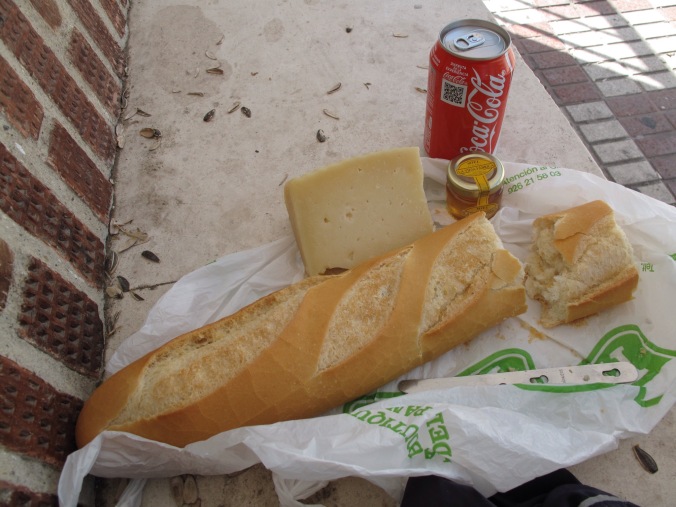 It went down, until the next city, where it went uphill again, until at 385 metres. I found a Lidl with some free wifi outside it, so I bought some food for dinner and for the next day.
In the next town I found another Lidl where I bought snickers. It was getting late so I needed a place to stay at, and started looking. I found a petrol station at the intersection between my road and the highway, and asked if I could pitch my tent there. No problem, and there were a water tap on the outside. No wifi though, but there were a 24-hour restaurant nearby, where I went and asked for wifi. No problem, and I talked a bit with them. After taking a look at the menu, I decided to eat some “real food” instead, and I am happy for that! It was really much, to a pretty low price. I also asked if they had a shower, wish they had, and they told me I could use it for free because I was “an adventurer”!

I also asked for a table with a power outlet, so they got me a cable from the outlet to the table. Not a small one, but the ones you usually see at construction sites. The people really were nice and even if the day started shitty, at least it ended really well!