In the morning, a family herding their sheep was looking at us while eating and packing. The children also asked for candy for about half an hour. 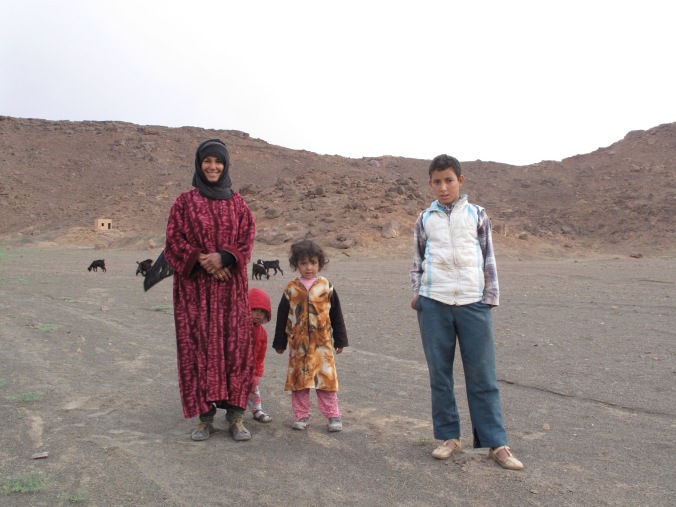 There had been raining some during the night, but the tarp kept it out without a problem. The only problem was me, when I tried to strain the pole, and one of the sides jumped loose from the ground.

It was really nice, apart from the barking, which at least didn’t come any closer!
We went back into the city to refill water and get food for the day. I managed to fall once, as the front wheel went right in the sand, and my foot couldn’t get any grip. At least it was soft, but I got sandy and my rear view mirror came loose.
We wanted to be sure to have extra energy, as there would be no real road at majority of the trip today. Sam discovered a problem with his chain, which he had to change, and I took the chance to re-attach my rear view mirror and put extra bar tape on. 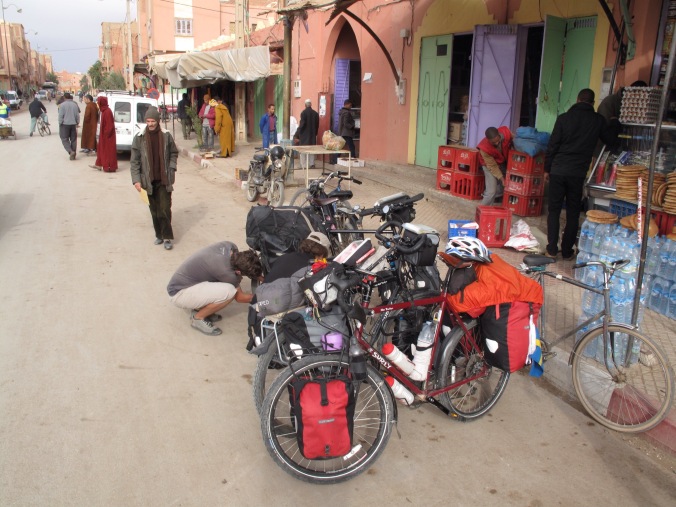 We started out with 15 easy kilometres, as it was still asphalt. We actually only had 50 kilometres to do the whole day, so even with off-road it shouldn’t be a problem!

When the road went into gravel, it was easier to just go off-road in the side. We pushed on, with some small brakes, and a bigger brake for lunch under a single tree we found.
The roads we went on looked mainly like this:

Soon, we had the mighty dunes in our view. It was a really cool view, and something to aim for! 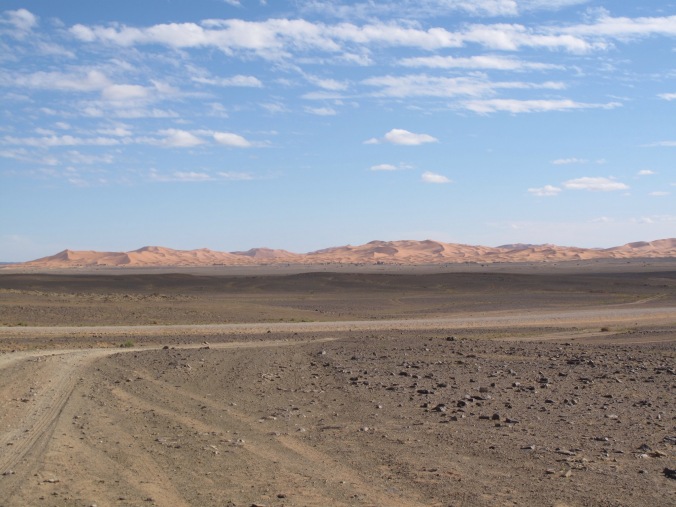 With 15 kilometres left, we decided to go by GPS direction instead of going by the road. We had some uphills and downhills in the middle of nowhere, but also found some things!

We came to what we thought was Merzouga, and started looking for the cheapest hotel through the phone. My GPS said it was 4.5 kilometres more, but I just thought I had the wrong coordinate. We found a hotel that should be pretty cheap per person, and decided to take aim at that. Some guy who talked with us told us that this was actually a small village close to Merzouga, so the GPS coordinates I had were right!
We ride the last 5 kilometres on asphalt, which went pretty fast. Into Merzouga the touts started, offering cheap camel tours and hotels. We told them we already has everything we needed, but some guys trying to block the way followed us on a moped and continued talking with us. Really annoying.
We came to the hotel, and we let the French try to get the price down. The manager said he only gave people a discount if they were from a specific place in France, which happened to be Alicia’s village. He honoured what he said and gave us a discount!
I started with taking a shower and then washing my clothes, as both were some days ago.
In the evening, we went to eat dinner. Alicia stayed at the hotel room as she felt bad, but told us to get some coca cola.
While shopping for snickers and coca-cola, we met a nice store owner who loved to talk. I learnt about their currency real (which were not used anymore more than in talking) and some other stuff.
All three of us were tired so we took a relatively expensive restaurant, but with an included big salad as entrée, and some fruit for dessert, the price was fair.
I have now biked from my home in Västerås, Sweden to the desert by Merzouga, Morocco!

2 thoughts on “Welcome to the desert!”