We got woken up at 0430 to be back in Merzouga in time for the bus. After a scumpy way back, we got to admire a nice sunrise with some distant rainclouds! 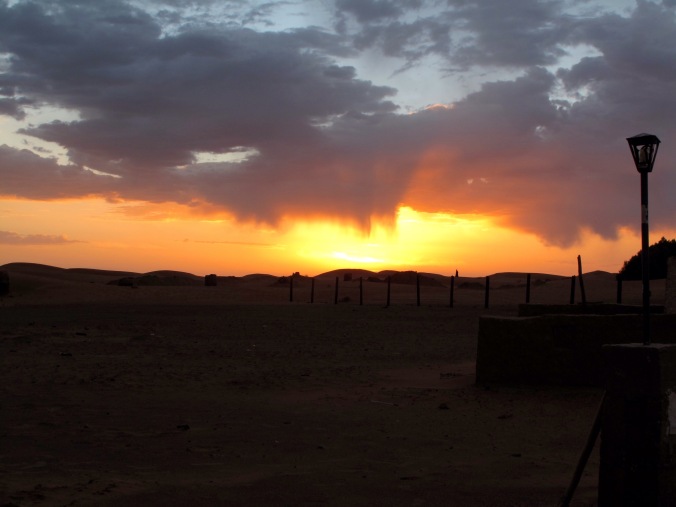 After a breakfast at the hotel, we set off for the bus. The ride was pretty boring. I looped it by watching some series until I felt too sick, going to sleep, waking up and repeat. No toilet on the bus, so I didn’t want to eat/drink too much. Also, the bus ride went by really curved roads in the mountains, but at least I wasn’t one of those throwing up!
Andrew and Jake were going to Ouazazate, and my aim was Agadir, with a stop for the night in Marrakech. Soon, it is time for me to fly home!
I said good bye to Andrew and Jake in Ouazazate (where Jake lives), and continued to Marrakech.
Finally there, I met two Austrian backpackers/climbers, and followed them to the cheap part of town. At the second place I asked (as I need a single room) I could sleep on the terrace. Apparently, they had no roof, and as it was going to rain, I could sleep in a sofa in the corridor.
I went out to eat, and started with an ice cream, followed by a pizza. Walking among the streets, I met the Austrian guys again, and followed them to eat some french fries and meat. As their flight would leave at five in the morning they went back to their hotel, and I went back to mine, as my bus to Agadir would leave at eight!