We continued, and as the away-trip would mostly be focusing on Kazakhstan and Kyrgyzstan we tried to get there more or less as fast as possible.

By the road we saw a monument we stopped and looked at. The sign told us that this tank was one of the tanks which got the ”fascist Germans” out of the city.

When we came closer to Moscow, there had been an accident on the highway, and the traffic moved really slowly. As I needed to go and pee, I took my chances and went out of the car. The traffic started letting up, so I got myself a good cardio session on my way back to the car! 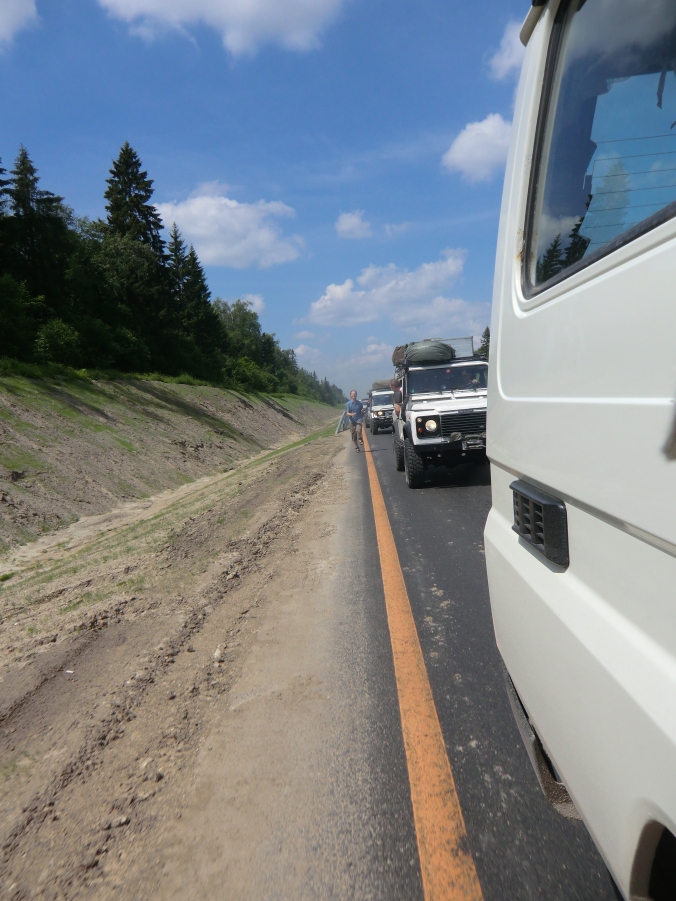 Then plan was to drive by Moscow by the ”inner circle”, but because of the street signs (or our skills) we managed to take the wrong exit on the highway. The right one went over and to the left, so we got ourselves a small sightseeing in the outskirts of Moscow!

On the highway we saw some black smoke in the distance. Luckily, it was not an accident, but someone seemed tired of the persons tire.

For lunch we stopped at a petrol station to just buy some sandwiches. Just before that, we passed two touring bicyclists!

They came into the same petrol station as us for a pause. Apparently they were going home from a short vacation at their summer house. They biked 125 kilometres on the highway to get there, stayed for two days and went back.

Fredrik had a place planned for the night. When going on the road, someone had built a rail road right over the way, blocking our possibility to pass. We stayed at the place we were at, as we didn’t want to spend the night trying to find a way to the lake, and decided we could bath tomorrow instead. For dinner, we cooked food ourselves, a first for this trip! The dinner was made of what we had in stock, which was pasta, tuna, mushrooms and some other vegetables.