I did feel better when I wake up, even if I did not feel good. The nausea was gone, and my stomach did not really hurt anymore. I also managed to start eating again, even if it was not the most pleasant thing, and in the evening that part started feeling like normal.
As it was a resting day, there were nothing planned. Some went up in the mountains to the place the Yurt camp were supposed to be, but did not manage to find anything.
I stayed in camp, and continued on Pokémon, which I had not touched in over a week. At least I rested well, and got to sleep many hours during the night and afternoon before.

In the afternoon, we played some card games for a while. I had to go to the bathroom too many times during the day, but otherwise I could at least rest, even if I felt unhygienic and dirty. The river was too lively, so you could only splash by the side of it.

Suddenly, we had a horse in our camp, and later another one got pushed over the river by its shepherd. They had their forelegs tied, probably so they would not be able to run away. They seemed to become friends, or at least help each other keep the flies out of each other face the rest of the day, until one of them got fetched. 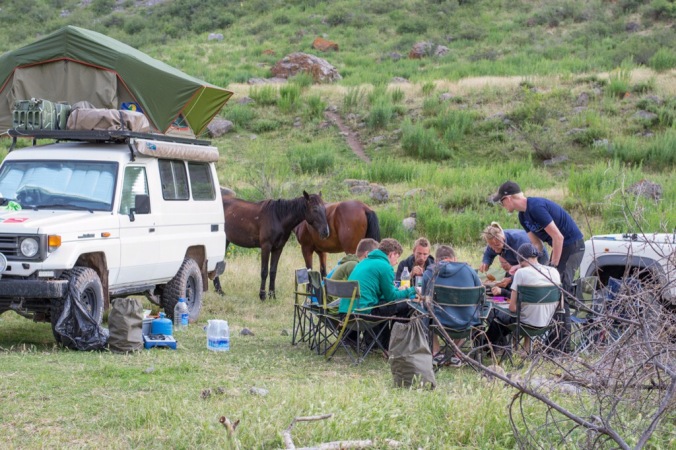 I also played around with the ND-filter for my camera, and I think the result was pretty nice!

It was a pity I did not feel this a little little earlier, as I could have stayed in the hostel instead, with a real toilet, shower and AC. This was a typical happening that made it feel bad going in a group like this, as I otherwise could have turned when I started feeling bad. At least I got the positive part, with the group setting camp, cooking food and fixing whatever needed to be fixed!