After a slow flight, but with the right sort of food (although really disgusting according to Astrid, who doesn’t long for neither the flight home nor China) we were able to get our visa, and soon thereafter all our baggage. My bell was missing, and Astrids front brake disc was bent, but apart from that the bicycles were in good condition. We took the brake disc off and started our first trip.

Through a lovey of mine we hade gotten a place to stay at in Auckland for our first night. With approximately 21 kilometres to get there, it didn’t take too long, even though we had to add two kilometres because of taking the wrong turn twice.

When getting there, we got tea, a hot shower, washed our clothes, dinner and a nice chat. We had some things to plan and were pretty jet lagged, but managed to get to bed at 02.00 AM.

Up again at 08.00 to shop for a brake disc and some USB chargers fitting the New Zeeland outlets, and then to the bus. At 10.30 we left Auckland to get to Wharangei, where a skydiver would meet us. He had even offered to drive us all the way up to Cape Reinga, which would fulfil our wish to start in the north. Astrid was really tired, and slept most of the bus ride, and also most of the drive up from Wharangei.

En route to Cape Reinga we stopped for methylated spirits and food, so that we could cook ourselves dinner, breakfast and lunch.

Jim let us off, and hopefully we’ll be able to visit him on the way down and, if the weather and timing is alright, do a skydive or two. We’ll see about that on Wednesday!

We set up camp and started making dinner. Being the northwesternmost point of New Zealand, it was really windy, with winds mainly from the west. It was steep on either side, and we were really careful when putting our tent up.

We managed a marvellous dinner and a bottle of wine, with a beautiful sunset. The night photos were also really cool. 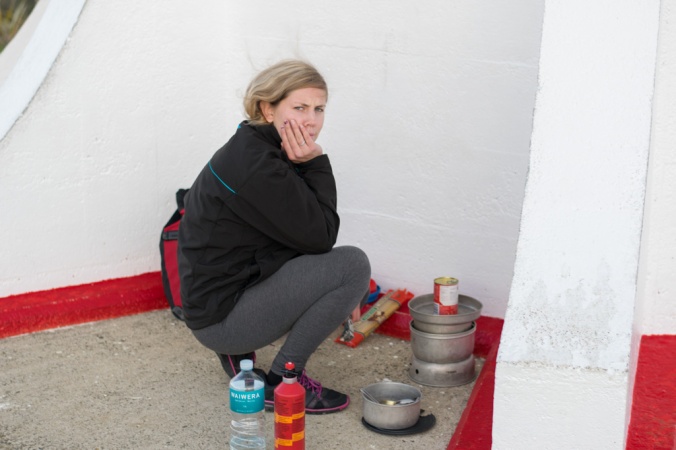 I (Jackiie) went upp quarter past six to try and get some nice photos of the sunrise. Clouds were in the way most of the time, but a lot of the photos were really good! 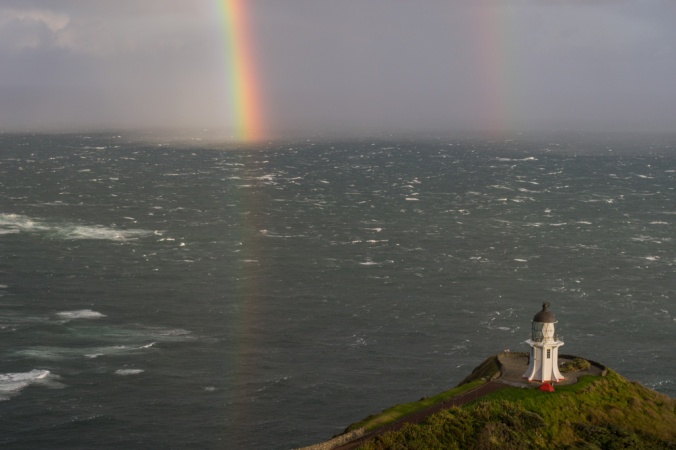 After waking Astrid up, eating breakfast and getting all the gear together, we started biking at 09.30. The start would be more hilly than the end of the day, and with the wind strong in the side it was pretty hard to start with. Soon the road was going mainly south-south-east, which gave us a lot of tailwind. The few times we had headwind was terrible, though.

We managed 35 kilometres with one big break before making lunch. It was not that easy, as we didn’t have a can opener, but stones worked good enough!

Finally arriving at our planned destination, Pukenui, we special ordered vegan pizza before going into the small supermarket for shopping. Both of us were exhausted, even though I have been biking a lot more than Astrid, as I took the front position for the whole day. That, plus the hills, makes my body scream.

As a shower and internet seemed nice, we went to a camping nearby. It was really refreshing with a shower, and I got the chance to look through all the pictures form last night and this morning. Beautiful!

Let’s just hope we manage do this for three more days, and then a planned rest awaits us!