After another loaf of bread (but as breakfast this time) we were heading out! Really happy that we met Ana, and that she invited two totally crazy Swedish strangers into her house!

Her daughter has built a beautiful magical village, by the way!

Because of the form of New Zealand, and the mostly constant western winds, we would have pretty good winds on the north island, and probably less good winds on the south island. Thanks to the general direction we had biked so far the winds had been awesome, but this day consisted of mainly headwind.

We spotted a really random park, or whatever it was, consisting of many att projects (or just random stuff people had managed to put there, what do we know). There was a fence and gates around, se we didn’t enter, but had a nice view for lunch!

When we finally arrived at the drop zone in Parakai, they had already closed down for the day. Instead of living ten minutes away, we decided to rent a small box (or room, but more like a box) with a bunk bed in it, as this was much closer to the DZ, and also we could use the internet, do our laundry and use the kitchen in there. There was some nice people too, which is always awesome!

In the morning I went up quite early to try and get my briefing at the drop zone. Even though I was there quite early, about half past eight, I had to wait about two hours before someone had time enough to help me convert my license and show me the landing areas and rental gear. I got a Safir 170, and went up as soon as possible. What they didn’t tell me was that the landing area was a bit wet, which made me pitch a bit early, just to get to a somewhat dryer patch. My pants and shoes still got dirty from the walking, though.

Astrid had a small sleep in, but when she was fully awake, she went shopping, and also cooked lunch! Really awesome.

Meanwhile, I made a second jump with two guys I met. To make it easy, we did a Skydance (more or less three people holding hands, and starting on one side, one person let it go and flies to the other side of the line). I had added a weight belt of four kilos, but I was still too light. We managed to do some rounds, though, and it was lots of fun!

Also, my pants and shoes were clean again, after a minute in free fall and a more planned, and dry, landing.

Those two jumps took a lot of time, and after eating and packing, we departed at around five. There was a road that was supposed to be shorter and closer to the coast, but we had no idea about the quality of the road. We took our chances, and after ten-something kilometres into the woods, we found a locked gate, with the text “forest harvesting – public access forbidden” or something like that. As we are Swedish, we lifted our bikes over the gate, rather than turning around and bike uphill again. It was labour day, and that may have helped, because we saw no-one in twenty kilometres. What we did do was to experience an awesome forest, some sometimes good-sometimes bad roads, and a lot of wild life! I saw at least four rabbits and five deers, and of course there were birds both here and there.

After getting through two more fences (more like car blocking, but we had to get our bags off), we just had a couple of kilometres to what would be an awesome camping place! Down to beach, where there were supposed to be a camper van area, and we found public toilets and drinking water. There were sand dunes, some beautiful black sand and also a spot that looked like it was made to be ours. Up on a small ”cliff” with a steep wall down to the beach we pitched our tent, with a great view for dinner! 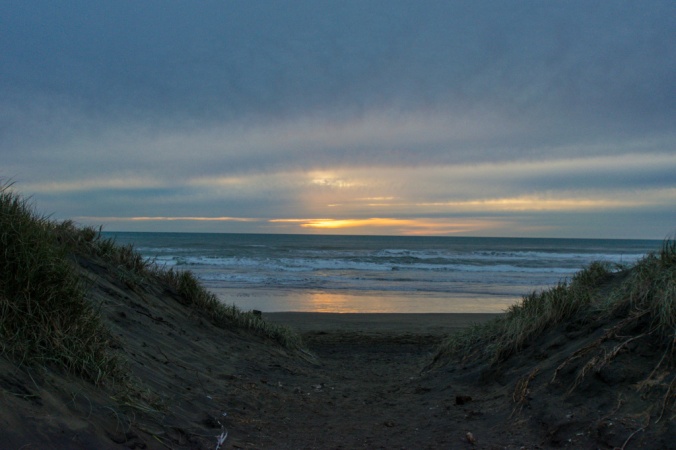 When we were almost done with ours, we saw some germans down at the beach trying to light a fire, but failing. Of course we would be nice enough to help them, and walked down there with our kitchen fuel. It burnt alright! 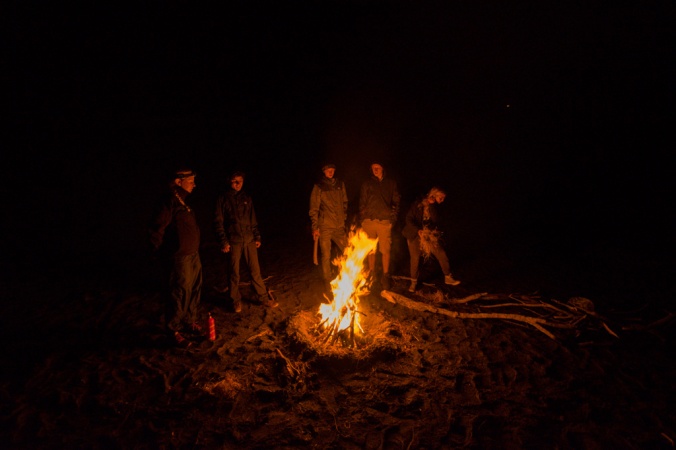 One of them gave us a good tip about Coromandel, where we were headed next. Awesome!