We were supposed to get on the 10.20-bus, but when we came there 9.30 the bus driver told us we would probably have to get off in the middle due to normal luggage being prioritised before bicycles. The next bus would leave 14.20, but we couldn’t be sure we would be able to go with that one. Up on our bicycles and we went to the nearby camper van parkings to ask around. None was going in the right direction with space enough for us and bicycles. One guy was positive, but he was going north. To actually have a real chance, and not just ask parked cars, we went to the main road just east of Taupo. It took maybe fifteen minutes before we got picked up.

I think his name was Max, and he just happened to have a trailer as he was moving (or his girlfriend. Something with getting a car for his dad as well, I think.) He wasn’t going all the way to Wellington, but would stop in Palmerston North. That was about two thirds of the way, and would help us a lot!

After a nice ride (and I only fell asleep once) we got dropped off outside of the information centre in Palmerston North. There was less than one hour before the bus would arrive, and we booked that one. When the bus arrived it was the same bus driver, but another bus. He told us we must have been fast on the bikes, and if we could fit our bicycles in one of the smaller compartments, we could go with the bus. The front wheels had to be taken off, and my saddle had to be lowered, but we managed, including running in to the office to pay for the tickets. The bus driver didn’t care about the extra 20 NZD for the bicycles, which was nice. At least half of the bus fare saved through hitchhiking!

Without any food, we arrived in Wellington. As we would live with another Warmshovers host we bought ingredients to be able to eat ”real food”, and then started our small trip through the city. The GPS suggested to go through an awesome park. It was surrounded by buildings and roads, but the park itself had everything – cliffs, trees, bushes and walkways making it look like we were out in the middle of nowhere. And it wasn’t even that big! If I would have lived in Wellington, I would hang out here. A lot!

There were stairs, though, which our bicycles didn’t like. In the end we found a way up and out (as the park was in a hill) but we had to push our bikes on a really steep gravel road.

Starting downhill, I knew there was another uphill we would need to go up to get to their house. It was long and steep – but damn, good views! 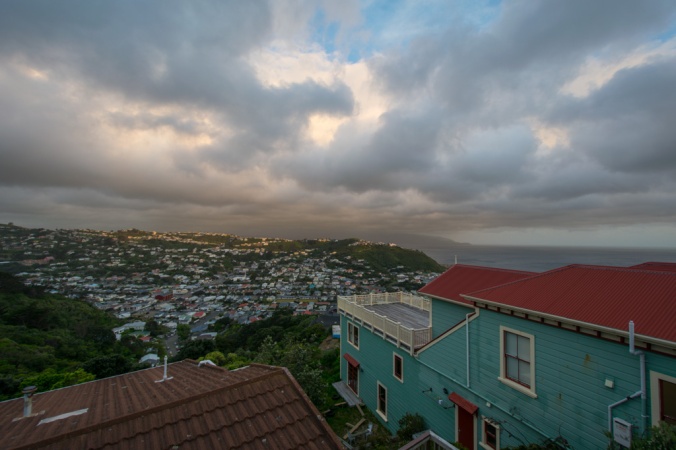 Julie and Thomas were our hosts. Thomas had Swedish parents (which we though after seeing the name) and there were a bit of Swedish things here and there (Dalahorse!) They were going on a barbecue for the evening, so we cooked our dinner.

This evening was the celebration of Guy Fawkes as well. None of us had the energy to get back to the city, knowing we would have to bike uphill on the way home again, and so we missed out on the fireworks. There were small fireworks going around us for a couple of hours anyway, and we had our own little celebration; watching V for Vendetta!

Our main event for the next day was the national museum Te Papa. We began with their World War 1 exhibition, which took two hours alone! I was afraid we wouldn’t have time to see what we wanted, but this was apparently the longest of all the exhibitions.

After a lunch at Pita Pit (one of the places that serves vegan fast food) we continued exploring. One of the, according to me, more interesting exhibitions was about the LGBT-rights, and the anti apartheid protests. Other exhibitions were random art, immigration history, millions of years of transformation of New Zealand, earthquakes and much more. In the end, I felt one day was actually quite enough, as we were looking at less and less interesting parts in the end of the day.

In the evening Julie had made falafel for dinner, which was really awesome. Thomas told us about the times he had been in Sweden, and we talked a lot about Sweden and New Zealand, trip plans and life overall.

What I like about Warmshowers, instead of Couchsurfing, is that I never had anything close to a bad experience through this. People have the same interest as well, being mountain biking, bicycle touring or commuting – but biking it is, in many different ways!