As I was leaving the backpackers, the manager told me about a road he thought I should take, as I would be able to visit a seal colony as well. It was another 20 kilometres, but whenever I get a tip like that, I feel like I would miss out if I skipped it. 20 extra it was!

When I arrived out there I noticed my rear wheel was going a bit soft. I thought it could be a flat, but decided to wait until after the seal colony, so I would be sure as well.

It was a beautiful walk to the seal colony, and upon arriving, there were a few seals as well. I met a photographer who was travelling mainly to take photos, and exchanged a few words with him. I would never be able to wait with editing my photos until I come home; that way I would just continue postponing it (looking at you, photos from the Kirghizistan trip). 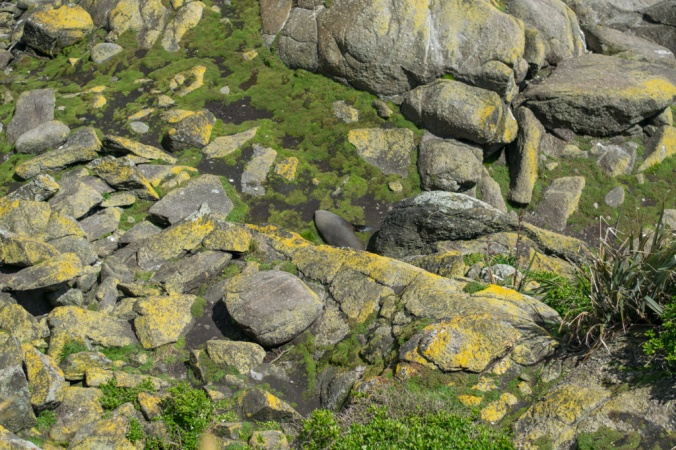 The tire was flat when I came back, and I began the tube change. It was a small plastic spike which had gone through the tire. I noticed a lot of cracks and tears as well; probably back from the Maungatapu track. 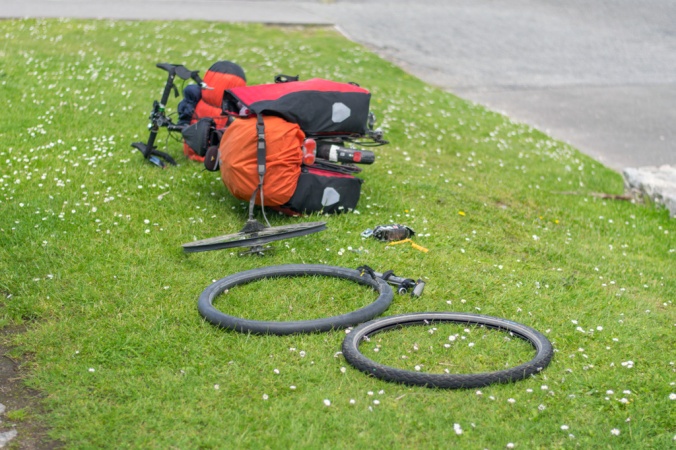 I set off again with my aim set at Punakaiki. I had the mountains on my left and the sea on my right; it was a beautiful view, especially for taking a pause.

I climbed what would hopefully me my last climb today, and gazed back at the road. It was beautiful all right!

After adding layers of clothing I started going downhill. Suddenly I saw two people at a resting point in the middle, and one bicycle with lots of gear. Had to stop and speak with them!

The bicycle fitted with panniers and what not was owned by a German living in France, Heino, who had been biking for thirteen months, I think. The other person had a bicycle as well, with two almost empty rear panniers, and it looked like brand new! The guy owning it was Michael, and the bicycle was more than a year old, but well taken care of. His aim was to do a trip, but he didn’t know when. Also, his cycle was a Surly Disc Trucker, just like mine, from the same year (the same red colour), with a few small differences. He had 700c wheels, and some things were probably just from another batch, but otherwise identical!

I sat down and spoke to them, and this was the German the Polish people had told me about. The Kiwi told us abut a good wild camping spot, and as I hadn’t wild camped nearly anything so far, it sounded like a great idea. The spot was close to a river with drinkable water, and a beautiful view of the gorge. Michael stayed with us for a few hours while we set camp and ate dinner. There were horses walking around freely, but they would probably keep their distance. I was really tired from not having had time to sleep as much as I wanted to the last days, and went by bed earlier than the others. It was a neat evening!

Suddenly I woke up, with the tent, and me as well, shaking! I was really newly awake, and I was sure it was a bunch of cows shaking and/or eating at my tent! I said something to the others, not sure of what, and as it stopped, I went back to bed. It was an earthquake!