A bit after nine in the evening, I got off the boat. I only had to wait for three trucks to get off before it was my turn.

My priority was to find somewhere to sleep as fast as possible, as it was already pretty late, and started getting dark. I tried to keep by the coast and after just a few kilometres I found a petrol station, so I decided to fill up first.

I looked at my GPS and saw some small side roads. The first one went into the forest, with some abandoned buildings on both sides, but as there were some small collections of water, I decided to look further. The risk if mosquitos or other irritating animals were too big.

A few kilometres ahead I saw a pretty cool abandoned house by the sea. I though I turned on a small road, but there was only grass, and I saw on the GPS that I was in between two small roads. I went over the bumpy plain, until I had a ditch ahead of me. I turned back and went on the road a couple of hundred metres forth.

More than the sandy part at the end of the road, there were no problems. The motorcycle was easier to handle than I had thought, even on the ”off-road” parts. The house looked cool and I set camp.

I woke up at 9.20 and started packing. While eating brakfast I documented my sleeping place, and some nice parts of the house and surroundings. 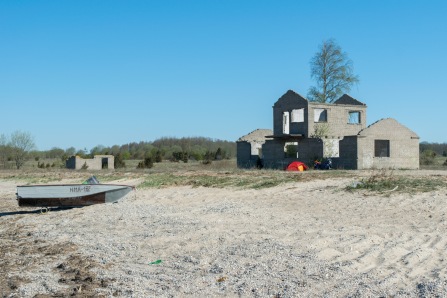 My plan was to follow the coast line, but the bigger road I was on was too much inland. After looking at the GPS I decided to try the gravel road out into nowhere. I have actually never been driving on gravel for real before, but after some testing that also felt good. This road didn’t go anywhere good, though. After more careful planning I had a road that would lead me to the coast, but the roads were even worse. Some of them was like the two dirt pitches with grass in the middle. Pretty challenging, and really fun!

I also had to pass three water crossings, this one on the picture being the smallest one. 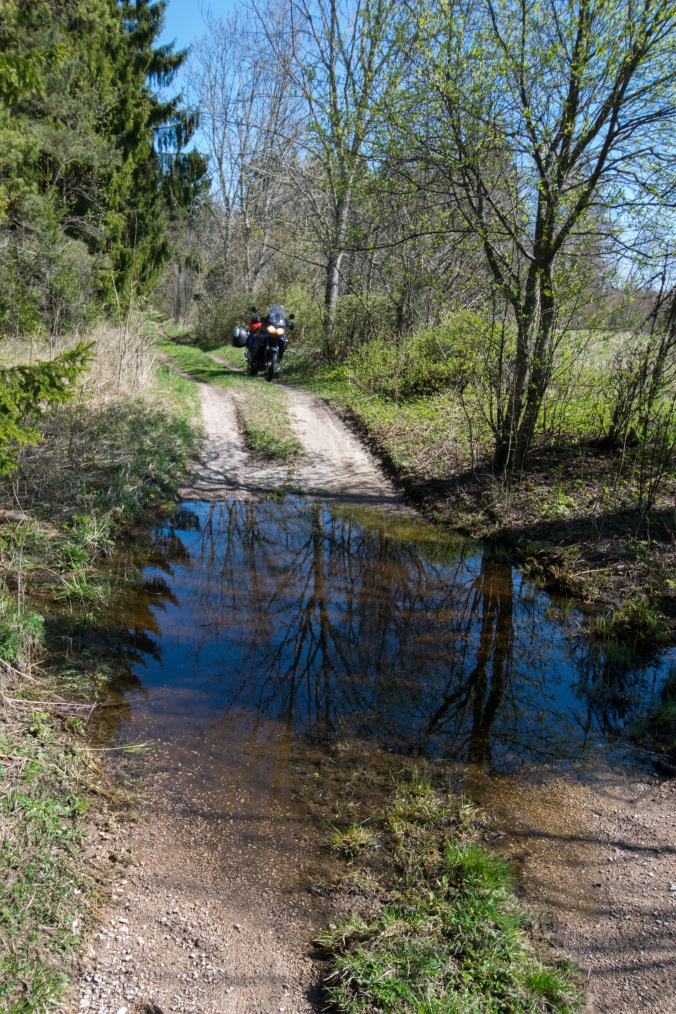 The third, and biggest one, I actually tried to turn around from. The ground was too soft, so I felt I couldn’t move the bike in any other direction, though, and instad I put some power into it, passing without a problem. The water was splashing everywhere, though, and I’m glad my boots are waterproof!

I also saw a nice building I wanted to visit, out at a point. When I came closer I saw the road went over a beach made of pebbles, but once again I didn’t have the strength to turn around. It was a slope towards the water, but I made that one too. A lighter bike would be nice, though! Actually thinking of buying a Transalp as a second bike, which could be a fun medium bike! 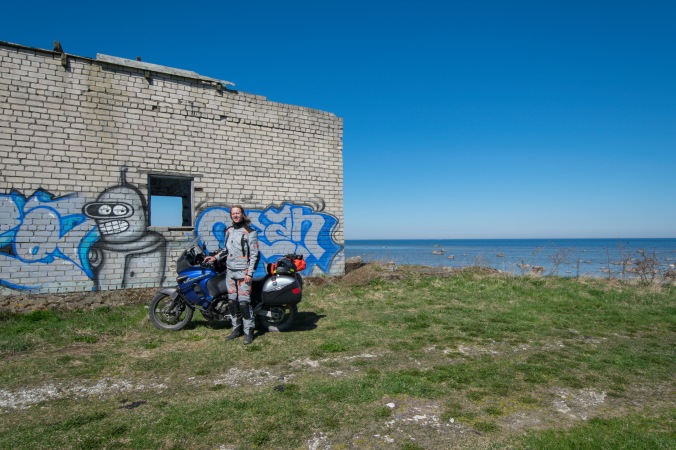 After this, I put my GPS on the nearest asphalt road, and started driving easy instad. It was pretty hot after all the grind, and I decided to take some kilometres instead.

When I stayed for lunch I saw a woman with a handlebar bag and two Ortlieb Rear panniers biking by outside. I wonder where she was going?

During the lunch I decided to book a cheap hotel outside of Riga.

What I hadn’t though of was that i had to drive through Riga to get there. That took so long time, and also the cooling fan for the radiator made a scraping sound every time it started spinning. I have to check that one up. My headset went out of battery, so I had to do the boring part without music also.

The hotel were next to a police station, which felt nice. After a check-in and parking of the bike, I called home to update the situation before going out for food. It was the same as for lunch; I had to order a normal dish minus the meat, as they didn’t have any ”real” vegetarian food. I was at a kebab place, and they made some really tasty bread, which they stuffed with cheese and vegetables. I bought some breakfast at the shop nearby and took a look at the surroundings, but there wasn’t much to see.