After just a couple of kilometres, we started climbing, and not even a little. We got up to 880 metres, which means more than 450 metres of climbing again! This would of course give some back later with some really fun down hill riding. Also, there were some really nice views from up there! 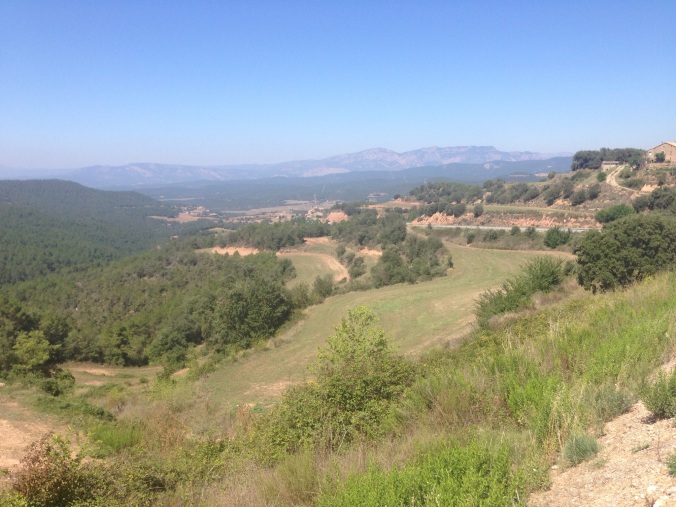 I rolled up to 70.4, and was able to reach 71.4 without feeling unsafe. Mostly I just relaxed downhill in speeds around 40-50, having a really nice time.
We decided to stay by at a Lidl to buy some snacks before continuing. After that we climbed up to 748 again, around a hundred metres, and we had 49 kilometres left, which felt really bad. Suddenly, the road starting being enough downhill for us to bike in 30 km/h, without having to use too much energy, and suddenly we had 17 left in what felt as no time.
It was really hot today, and I had started using my arm warmers against the sun, as they really cool everything down if you put water on them. During a pause we checked the temperature, and apparently it was 33 degrees in the shadow. Ouch!
After arriving in Manresa, we found out there was no nearby camping. We went and shopped at a small store, before going to the hostel (which was just 50 metres from the store). 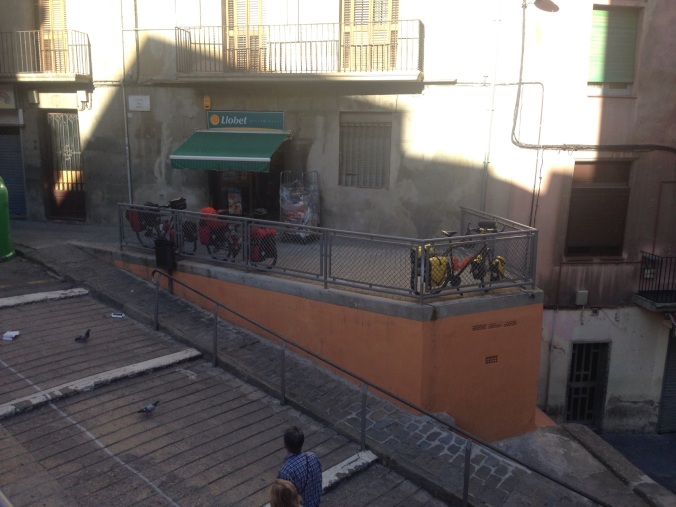 At the hostel, I tried “double cooking” for the first time with the trangia (you can actually use the frying pan at the same time if you want to). 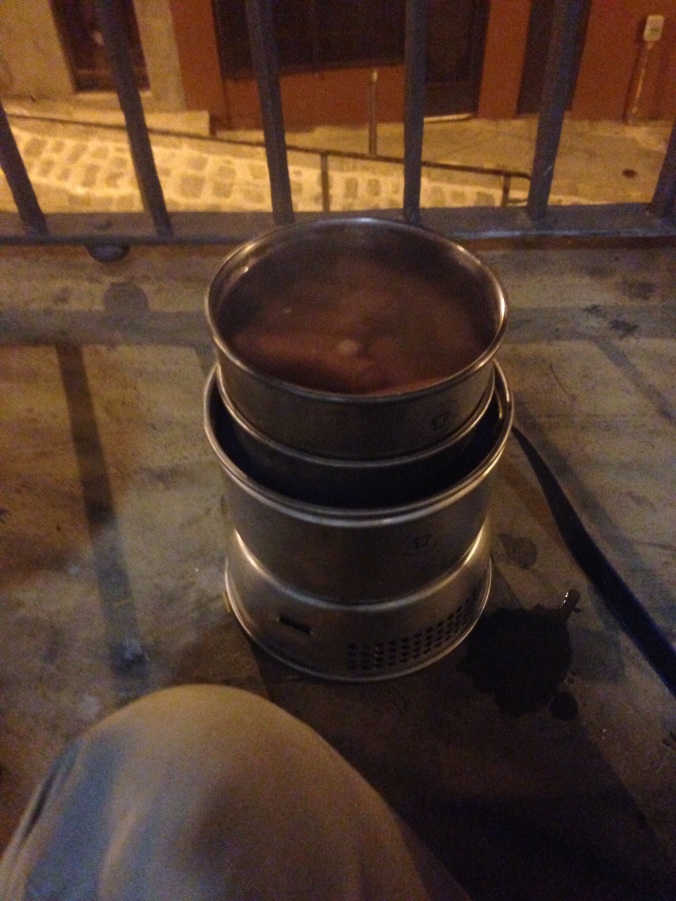 The street were kind of messy, so I am happy that there were a locked room for the bikes during the night.
We just relaxed in the evening, I watched another movie (300: Rise of an Empire) and then went to sleep!

It did not rain when I woke up, even though everything outside were wet and there were those slugs every here and there. I woke up at 0744, and somehow I had managed to snooze according to my phone…
I started at 0952, and during breakfast I had tried to find the shortest route possible, and therefore saved some kilometres. Now I had only 89 left, which should be easy!
The weather were crazy all day, from warm and sunny, cold and cloudy, raining and so on. At least I hade pa pretty good pace.
Then, it started to get hilly. In the beginning, it was hard, but manageable. I continued in 10-15 km/h, and at least got somewhere.
Then, it started to go really uphill. I thought it was really hard, and even had to walk for a bit as I could not bike there. When I went to the top, I saw the warning sign for the road I had just passed, and understood why it was so hard: 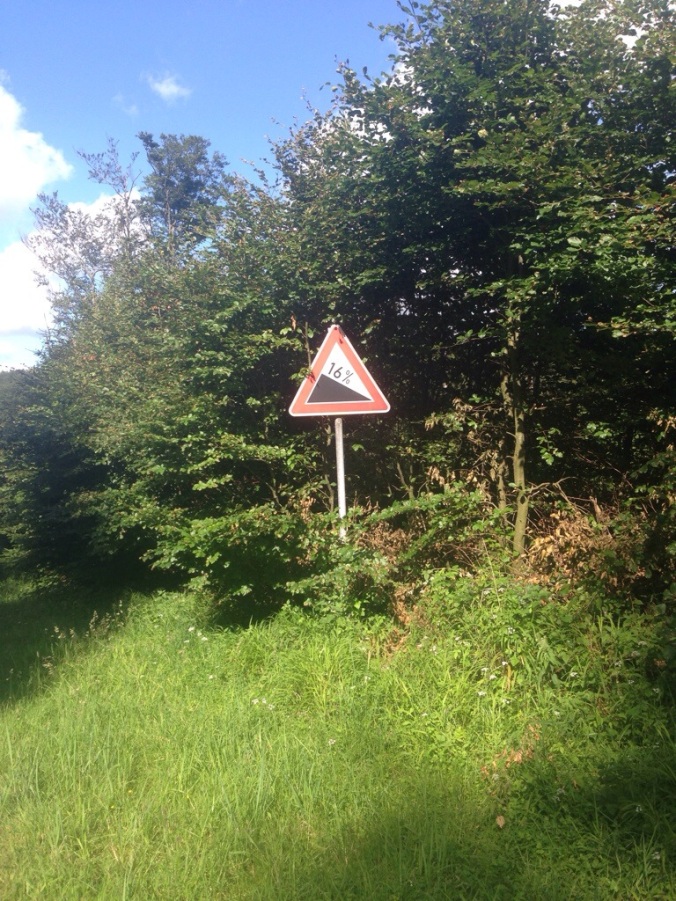 16% uphill really is something. I guess I will have to train more hill climbing!
The positive side of this is the other hill. Even if it was not as steep, the sign said 12%, which was more than enough. For more than 2 kilometres I did not have to pedal, even though there were small uphills on the way. I even managed to break my rolling speed record: The new record for highest speed without pedalling is now 68.6 km/h. It was an experience.
After the really steep downhill, I continued rolling at 20/25 km/h for another kilometre, before even having to start pedalling. I then saw another cyclist that seemed to live around this place, and asked if there were any slopes until Paderborn: Nope, just flat. Felt fine for me, and pedalled the last bit at ease.
When I arrived, I did not know how to get to Esther, as I had no phone number. I wrote to her at Facebook but while waiting, another nice woman invited me for a cup of tea. We had a chat about things of life, until Esther answered and I went up another stair. We ate pasta with tomato sauce for dinner, and her friend Kristin joined us. We then went out to buy something to drink, but more important: Candy! It is so nice to eat candy when you are exhausted.
We then looked at a football game at her Kristins place before going to bed, really tired!

Today, I continued my journey. I got up half past eight and started to
pack. At nine I went in for breakfast with the others, and after that I
went out to pack the last things. At eleven I had packed it all,
brushed my teeth and so on, and said goodbye to most of the people.
To the ones I did not meet when I was saying goodbye: I had a really
good time, and hope to meet you again. I really loved to stay those
days with you guys! 😀
Then, I was on the road again. I made pasta with garlic butter and pear
to lunch, which actually tasted delicious. Thanks Kim through Lizzie
for the inspiration! 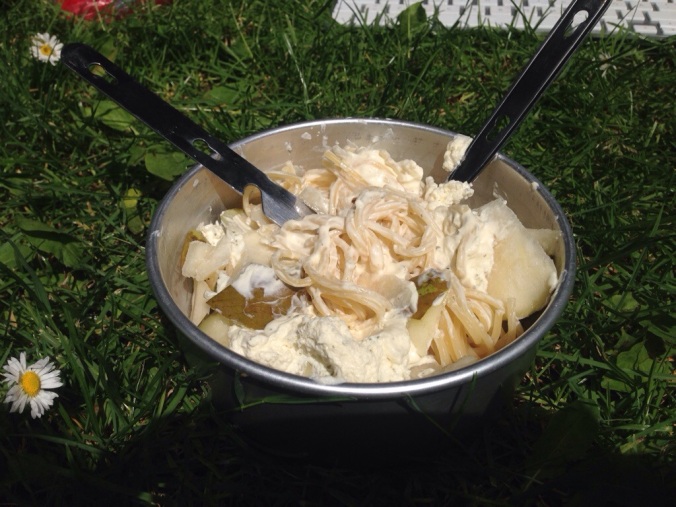 I also later on passed the limit of 1000 kilometres according to my
bicycle computer. That means I am on my time schedule, which is really
nice, and actually has gone around 5% of the way! (Even though I think
it will be more in the end.) 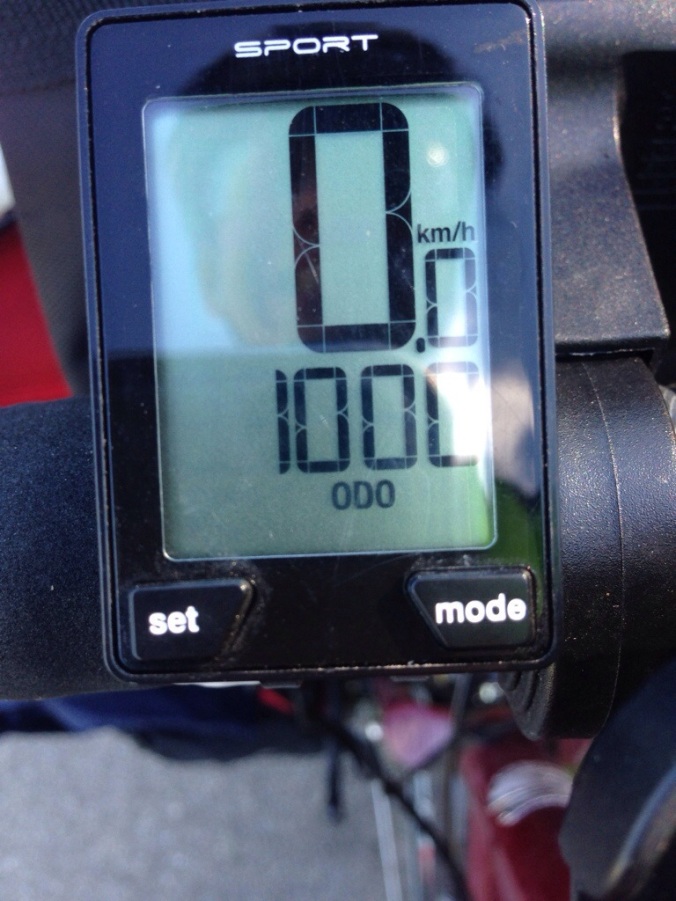 Earlier today, I also set a new high-speed recorc for rolling speed (no pedaling) at 63.6 km/h. It felt fast!
At six a clock I came to my couch surfer host for the night. She is
really friendly, outgoing and have a sense of humour, good or bad
depending on how you see it!
She let me make pancakes for us, which is awesome, as I have not eaten
pancakes since I left Lizzies place. She also asked me if I wanted some
cider, and so, I drank some Swedish-made German-buyed cider at my
Malaysian friends place in Denmark. 😀 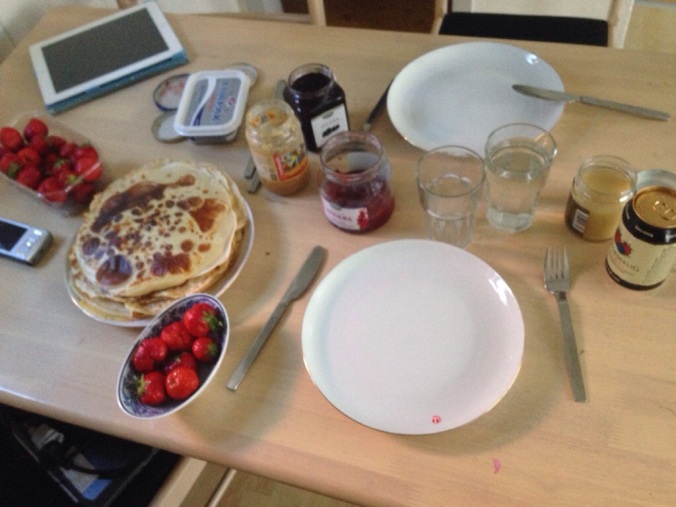 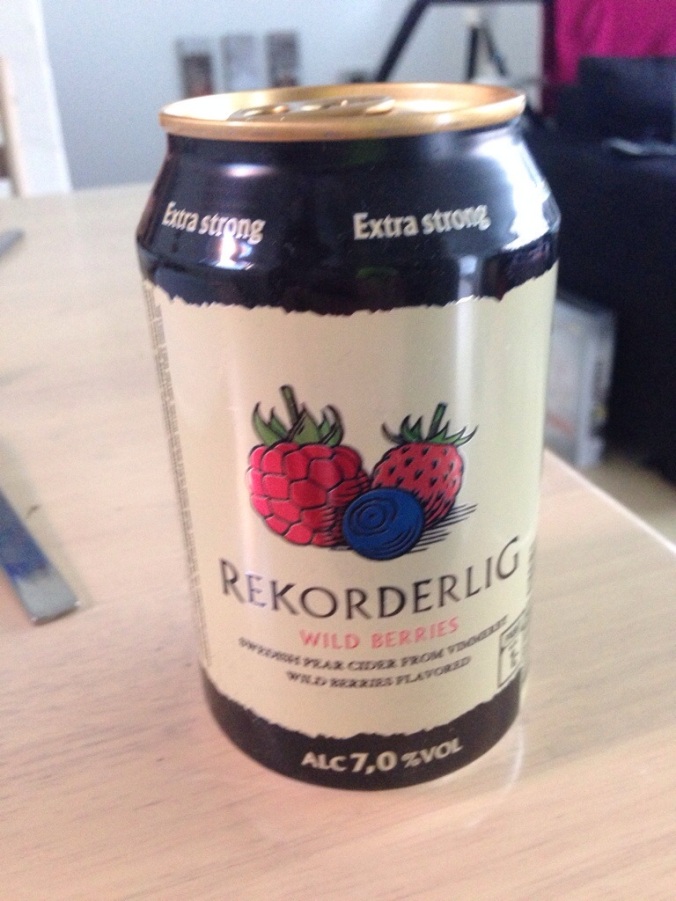 Now we are just having a good time with many bad jokes! It is nice to
meet nice new people! 😀

I have not yet really regained all the energy, but I did at least go about 90 kilometers today. 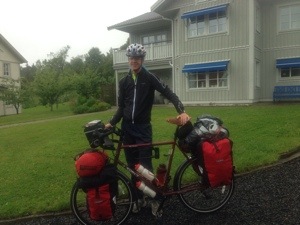 Me and my bike in Huskvarna!

I did feel pretty slow during the day, but as I started early, I still managed to get both some kilometers, long breaks and another interview done. This time, it was in Värnamo, and the article will be published tonight or tomorrow, and then linked from here (still in swedish though).
As I got at least around 170 kilometers until Höör, I guess I’ll arrive at saturday lunch/evening, but everything can’t always go as you want to!
I got a new high in “rolling speed”, the speed the bicycle can get to without help from me pedalling. 52.7 kilometers per hour, and still really steady! Fun was it! 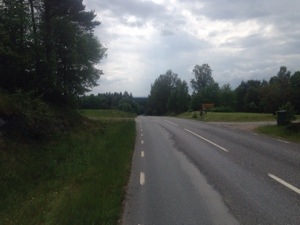 Today, it was raining from start until lunch. I had the luck to get invited by a really nice women who were home with her children so that I could take my pre-noon snack indoor, instead of in the rain. In the afternoon it has been raining in small sections, bot mostly just cloudy or even sunny. It really poured down when I put up my tent, but it stopped two minutes after. 😉
This is my first tent night on this trip, and so far it’s nice. At least I am tired, so I guess I will sleep well!

Also, during the interview, I got two baguettes by a nice man, friend to the journalist, owning a restaurant at the same street as the news house.